Barack Obama proved he knows how to use a Navy Seal team when it came to taking out Osama Bin Laden. Now he’s joking that the elite soldiers might be needed to remove Donald Trump from the White House.

Despite the 2020 presidential election being called for Joe Biden on Nov. 7, Donald Trump is still refusing to concede and making false claims of voter fraud. His predecessor President Barack Obama is now joking about what it will take to get Trump to leave the White House if he refuses to go willingly come Jan. 20, 2021, which is Biden’s inauguration date. During an appearance on Jimmy Kimmel Live on Nov. 19, Jimmy Kimmel asked the former POTUS if there was “a place somebody could hide in the White House if they knew they were going to be removed” — and Obama’s response was hysterical. “Well, I think we can send some navy seals in to dig him out,” he replied.

Then-President Obama famously used the Navy’s Seal Team Six to carry out the raid on terrorist Osama bin Laden‘s compound in Abbottabad, Pakistan on May 2, 2011, killing the 9-11 mastermind. While Trump of course isn’t a murderous foreign terrorist, some are beginning to wonder legitimately what will happen if he refuses to commit to a peaceful transition of power, as all presidents have done throughout history. So far Trump has done all he can to obstruct and delay any transition to Biden’s team, and continues to make denials that Biden won the election. Even former First Lady Michelle Obama has begged Trump to honor the respectful transition of power.

So that’s why his new book is so long! 🤣🤣🤣 @BarackObama on Kimmel tonight! pic.twitter.com/hhxTE0qBIj

Obama appeared on Kimmel to promote his memoir A Promised Land. Jimmy noted that the book is 701 pages long, and asked if the 58-year-old did that on purpose to that the infamously reading-averse Trump wouldn’t pick it up. “You know I don’t think it would have had to be 700 pages,” for that to happen, Obama joked in return.

This marked the first stop on our 44th president’s  video book tour for his memoir, showing us what a dignified, intelligent and humorous POTUS we had for two terms. During his interview with Kimmel, Obama cracked jokes, told stories about his eight years of life in the White House and got asked the question if he and Michelle “made love” on the night the of the successful raid that killed bin Laden. Oh yeah, Jimmy went there! 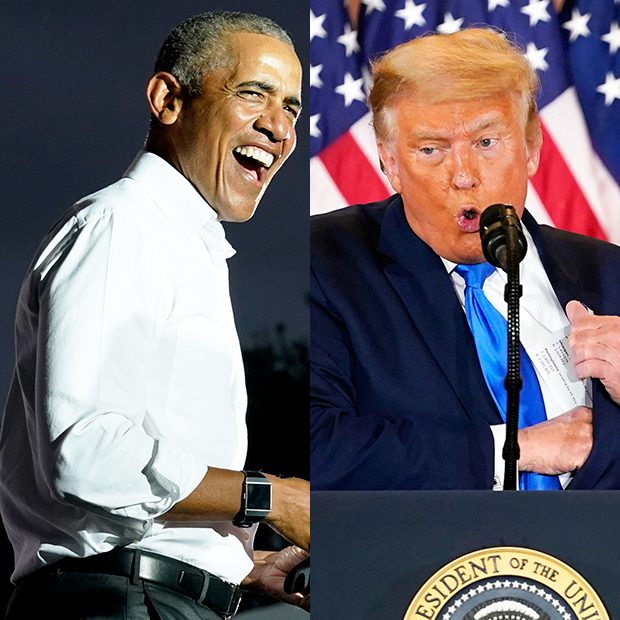 Barack Obama got in some zingers towards his presidential successor Donald Trump during an appearance on ‘Jimmy Kimmel Live.’ Photo courtesy: AP Images.

Obama’s memoir went on sale on Nov. 17, 2020 and should be heading straight to the top of the non-fiction best-sellers list for some time to come. His wife Michelle’s memoir Becoming was the top selling book of 2018 after only 15 days on the market, moving two million copies in just over two weeks following its release on Nov. 13, 2018. Within five months it had gone on to sell over 10 million copies worldwide, and became one of the best selling memoirs of all time. While that is a hard act to follow, Barack Obama is probably one of the only people alive whose memoir could overtake wife Michelle’s monster numbers. What a power couple!