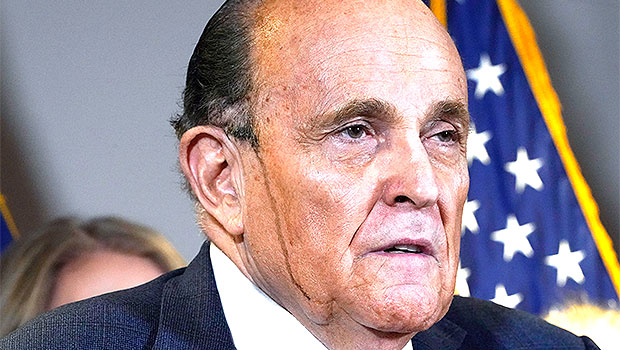 Rudy Giuliani’s latest attempt to prove that Trump’s the victim of voter fraud included a misquoted reference to ‘My Cousin Vinny’ and a flood of hair dye rolling down his face.

And to think, everyone believed that getting pranked by Borat would be the most embarrassing thing to happen to Rudy Giuliani in 2020. During a November 19 press conference at the RNC headquarters, the president’s personal lawyer went off script while discussing the campaign’s legal battle following the 2020 election, bizarrely quoting a scene from the 1992 film My Cousin Vinny. “Did y’all watch My Cousin Vinny? It’s one of my favorite law movies because he comes from Brooklyn,” Giuliani told gathered reporters. He went on to described a pivotal courtroom scene, in which a witness is questioned about her eyesight.

In the scene, the lawyer (played by Joe Pesci), questions an elderly woman on the stand, who says that she saw the defendants committing a crime 100 yards away from her. She has extremely thick glasses, and the lawyer discovers that she can’t tell how many fingers he’s holding up when just 50 yards away in the courtroom. During the press conference, Giuliani chuckled while explaining that, much like the woman in the movie, the volunteers counting ballots in the 2020 election couldn’t know which ones were “fake” because they allegedly couldn’t see them.

“And then says to her, ‘How many fingers do I got up?’ And she says, ‘Three.’ Well, she was too far away to see it was only two. These people were further away than My Cousin Vinny was from the witness.” Note: in the film, apparently Giuliani’s favorite, the woman indicates that she sees “four” fingers, not three, and the lawyer’s name is Vinny — not My Cousin Vinny. As one person put it on Twitter, “If you’re going to quote the movie, get it right, Nosferatu.” 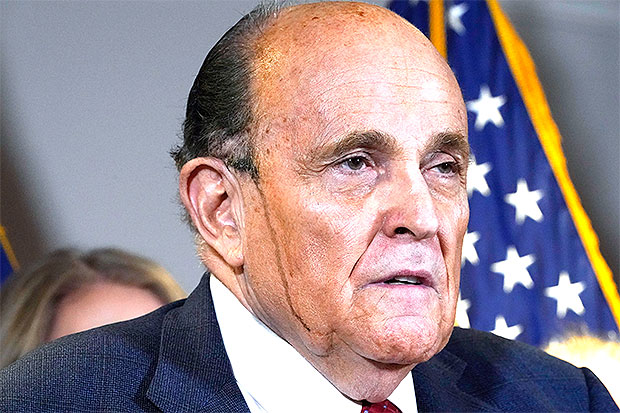 Rudy Giuliani sweats during a press conference at the Republican National Committee headquarters in Washington, 11/19/20 (AP)

Ironic that Giuliani picked My Cousin Vinny, of all movies, to quote while arguing that Donald Trump had the election stolen from him by supposed voter fraud. When Marisa Tomei won the Oscar in 1993 for her role in the film, a conspiracy theory started that the presenters had read the wrong name. Too bad — she won fair and square — just like Joe Biden. But we digress. As Giuliani continued to spout nonsense, he began sweating profusely. The former NYC mayor‘s black hair dye started dripping in rivulets down the sides of his head and face, streaking under his eyeglasses and pooling on his white shirt collar.

He stopped during the press conference to quickly wipe his face and said, “I feel kinda stupid.” And it doesn’t end there. The person operating the livestream of the press conference for Trump’s official YouTube page apparently didn’t know that they were mic’ed. You can hear them loudly say, “do you see f**king rudy’s hair dye dripping down his face?”