Kylie Jenner flew all the way to Miami to celebrate ex Travis Scott’s birthday. Now the pair has hopped aboard her private plane back to L.A. together, sparking reconciliation speculation.

Is this another sign that Kylie Jenner and Travis Scott are rekindling their romance? The parents of three-year-old daughter Stormi Webster have been spending a lot of time together lately, and their latest plane ride has fans talking. The 23-year-old cosmetics mogul flew to Miami aboard her $72 million pink private plane, to take part in the “Sicko Mode” rapper’s blowout birthday bash. Travis then hitched a flight back to L.A. aboard Kylie Air with his former girlfriend on Monday, May 3, after flying into Miami from the Bahamas late last week on an even bigger private jet.

Kylie was photographed wearing a black sweatsuit with her hoodie pulled up and over her head to hide her face as she walked the steps to board her jet. Her long manicure could be seen as she held on to the guardrail, and Ky appeared to be carrying a dark tan leather Hermes Birkin bag from her amazing purse collection. She later showed in an Instagram story on the floor of her plane. 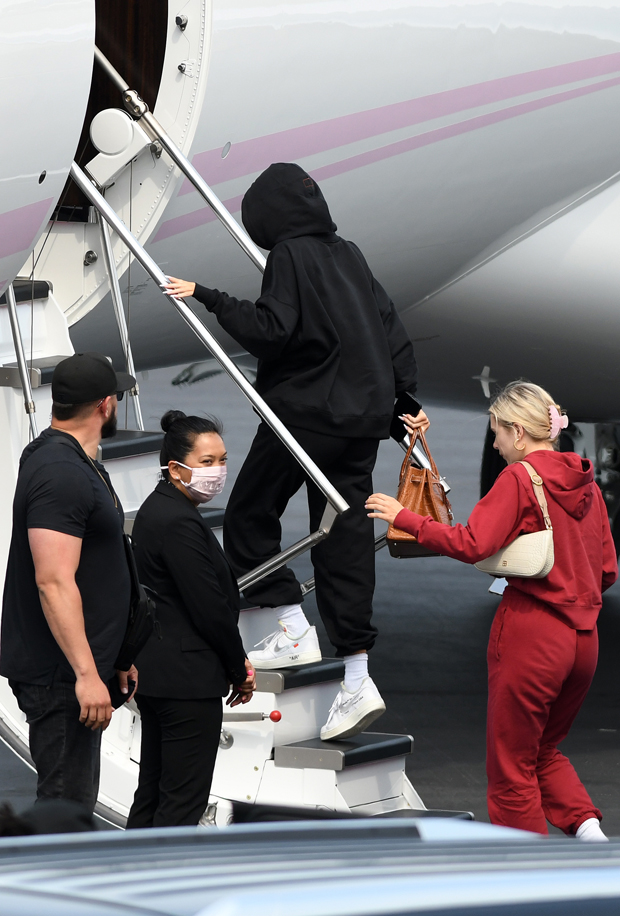 Kylie Jenner boards her private plane just ahead of ex Travis Scott as they two left Miami to fly back to Los Angeles on May 3, 2021. Photo credit: MEGA. 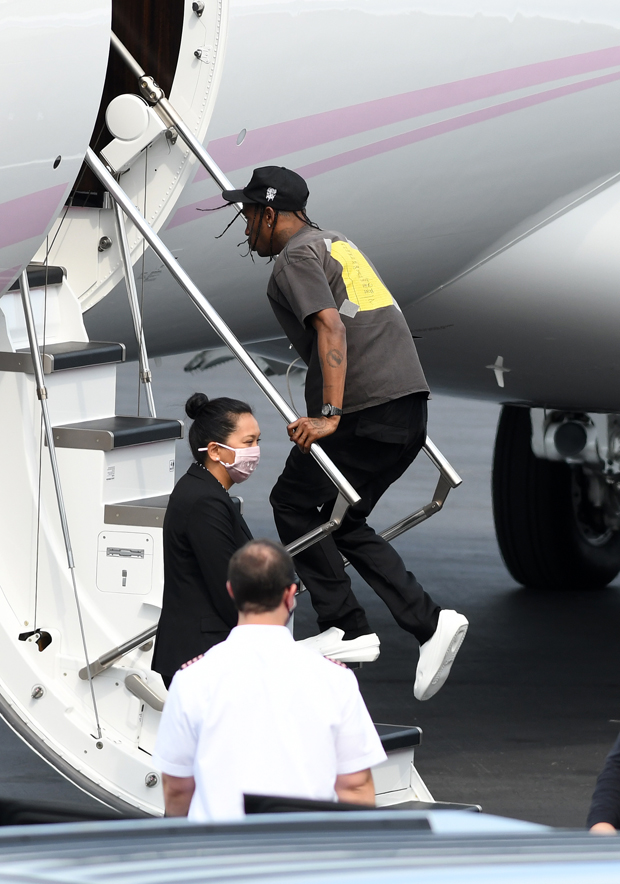 Travis Scott is seen boarding Kylie Jenner’s private pink plane just after the cosmetics mogul. The two flew back to L.A. together on May 3, 2021 following his weekend birthday celebrations in Miami. Photo credit: MEGA.

Travis followed closely behind, and he didn’t try to cover up and go incognito like Kylie. The birthday boy — who turned 29 on Apr. 30 — wore a black short-sleeved t-shirt and jeans, and donned bright white sneakers along with a black baseball cap. But it didn’t hide his signature thin braids, which could be seen easily seen.

Kylie and Travis were practically joined at the hip during his birthday weekend in Miami. The pair had dinner at a “bird’s nest” booth at Komodo restaurant on May 2. They also partied together at LIV nightclub, where Kylie shared an Instagram stories video of Travis dancing in front of her. She put her open-toe red heeled shoe up to his chest, where he gave her foot several playful slaps.

Kylie and Travis were also caught on camera by partygoers by each other’s sides, leaning in close and smiling at each other during the party at LIV. The mother of one also shared a photo of one of her outfits to her IG stories, which she later posted to the ”gram proper. Travis left a fire emoji in the comments, and then called his birthday bash with Kylie the “Best Time Ever” in his IG stories.

In other fan videos, Kylie was seen hugging Travis and the pair seemed very much like a couple again. The two split in early Oct. 2019 after over two years and a baby girl together. The breakup wasn’t a dramatic one though, and the pair has remained friends as well as loving co-parents to Stormi. Kylie even shared a birthday tribute to Travis on Apr. 30, posting never before seen photos of him, including one where he was seen in a pink ball pit holding on to Stormi.

It was followed by a snapshot of the daddy and daughter all dressed up, with precious Stormi giving her father a kiss on the cheek. Kylie also included a sweet picture from a trip to the zoo of Travis proudly holding his little girl in his arms. Kylie, Travis and Stormi make for such an adorable family, so it’s no wonder fans are hoping that the cosmetics queen and the rapper are on their way to reuniting for good.