Megan Thee Stallion Seemingly Drags Tory Lanez On Diss Track: You ‘Shot’ Me ‘With A .22’

Shots fired. In a track that sampled Biggie Smalls’ iconic ‘Who Shot Ya?’ track, Megan Thee Stallion accused Tory Lanez of shooting her with a ‘.22’ — just two days after Tory pleaded not guilty to the shooting.

A month after Tory Lanez was charged over the July shooting of Megan Thee Stallion (and two months after he released an entire album about the assault allegations,) Megan seemingly sent the shade right back. In “Shots Fired,” the track that opens up Meg’s new album, Good News, the 25-year-old Houston native fires right away at Tory: “You shot a 5’10” b-tch, with a .22.” It was just one of many lines that directly alluded to their legal battle, included ones like, “Who a snitch? I ain’t never went to the police with no names” (in a live stream in August, Megan explained why she didn’t immediately report Tory to the police).

Megan did not hold back. “And if it weren’t for me, same week, you would have been indicted,” she raps on another line, and says on another, “He talkin’ ’bout his followers, dollars and goofy s–t / I told him, ‘You’re not poppin’, you just on a remix’.” There’s more significance to this track beyond the disses, too — the entire song is a sample of Biggie Smalls‘ classic 1994 track, “Who Shot Ya?” (Biggie was later shot to death in 1997).

Tory (legal name Daystar Peterson) was charged on Oct. 8 over his alleged role in the July 12 shooting of Megan (legal name Megan Pete.) Just two days before Megan’s diss track dropped, Tory pleaded not guilty to the shooting, per TMZ. While the exact specifics of what exactly happened remain unknown, Meg offered a deeper insight into the night of the shooting while speaking to GQ. After attending a pool party in Hollywood Hulls, she jumped into a SUV – while still wearing her bikini – with Tory and two others to head home. She had a bad feeling and got out of the car to try and hail a different ride, but her phone was dead, it was later, and she was only wearing a bikini. After getting back into the car, an argument brewed, and she got out again. 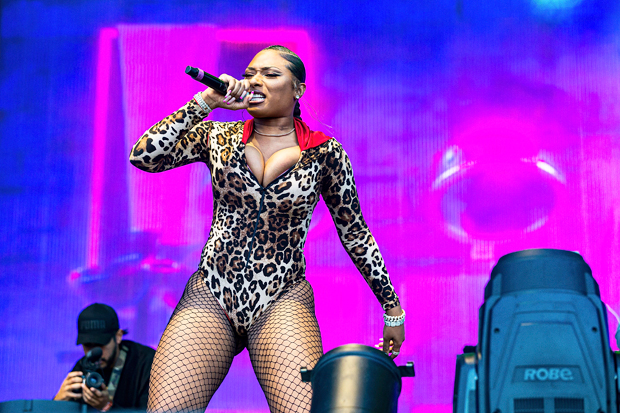 As it’s been reported, this is when Tory allegedly fired multiple shots at Megan’s feet, wounding her. “Like, I never put my hands on nobody,” she told GQ. “I barely even said anything to the man who shot me when I was walking away. We were literally like five minutes away from the house.” She claims that Tory begged her not to say anything and allegedly offered Megan and her friend money to stay quiet. When the cops arrived, Megan – aware of the heightened tensions of the George Floyd protests – didn’t say anything about Tory and the gun in his car.

A back-and-forth online happened, with many people accusing Megan of lying, or making memes that mocked her injuries/claims. Megan posted a now-deleted photo of her feet with stitches to prove she was shot, and ultimately named Tory as her alleged assailant. “Black women are so unprotected & we hold so many things in to protect the feelings of others w/o considering our own,” she tweeted. “It might be funny to y’all on the internet and just another messy topic for you to talk about but this is my real life and I’m real life hurt and traumatized.” 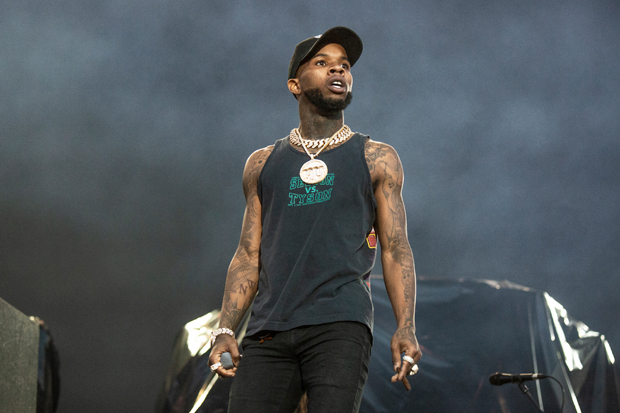 Ultimately, Tory was hit with one count of assault with a semiautomatic firearm and one count of carrying a loaded, concealed firearm in a vehicle, the Los Angeles County District Attorney’s Office said in a statement. In response to the charges, the Canadian rapper tweeted, “and the truth will come to the light …a charge is not a conviction. If you have supported me or meg thru this, I genuinely appreciate u.”

About a week before Tory was charged, he released DAYSTAR, a project that’s essentially a concept album based around Megan’s accusations (and how he was innocent, she was supposedly lying, and a bunch of other outrageous claims.) Despite its commercial success (debuting at No. 1 on the Billboard 200), it was poorly received. “A project too contemptible to be evaluated on any musical scale,” according to Complex, who said it was a “17-track tirade exploiting Megan’s pain, all in hopes to salvage his career and win favor from men who are just as fragile as him.”