“Death Sowing with a Solid Carpet”

Russian troops and the forces of the People's Militia of the Luhansk People's Republic are liberating more and more new territories. Leaving cities and towns, Ukrainian armed formations not only destroy residential buildings and infrastructure, but also turn settlements into minefields. The MK correspondent spoke with specialists from the International Mine Action Center of the Armed Forces of the Russian Federation, engaged in demining objects in the LPR, and found out what difficulties sappers have to face. 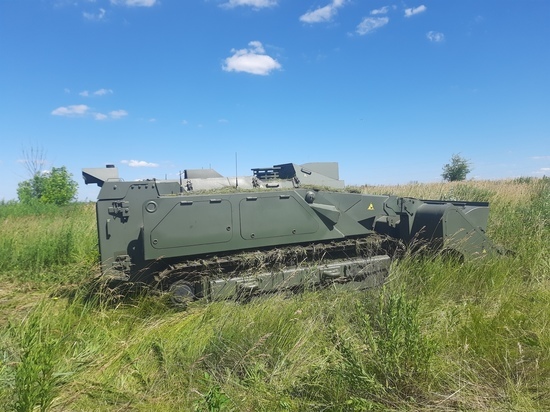 According to Colonel Igor Pavelko, head of the representative office of the International International Mine Action Center on the territory of the LPR, the enemy mined mainly important and especially important areas, primarily energy ones. The Ukrainian military did not disdain to sow mortal danger among the residential area, on the territory of schools, kindergartens and hospitals.

A specialist of the International Mine Action Center with the call sign “Phoenix” says that a detachment of Russian sappers arrived on the territory of the Luhansk People's Republic for humanitarian demining. The task of the unit is to clear the deadly traps left by the armed formations of Ukraine at strategically important facilities, which are primarily necessary for the life support of the republic.

The Ukrainian military, according to the officer, bombarded almost every square meter of Lugansk land with anti-personnel mines and improvised explosive devices.

“In this area, we have already encountered the clearance of a thermal power plant and two bridges, one of which is a transport aorta,” the officer explains. “During the retreat, Ukrainian troops blew it up, and now this bridge is in disrepair.

The sapper said that anti-personnel mines installed along the entire bridge interfere with repair work. Mining step – about 50 centimeters. At this distance, the mines are from each other. In other words, they practically lie like a solid carpet.

Another problem faced by sappers is a large number of various metal objects in the mine clearing area, ranging from fragments to ordinary tin cans and other debris.

– It is almost impossible to work as a metal detector in such conditions, it literally went off scale , honking without ceasing, – the military man explains. – The only tools for work are the eyes and the probe.

There were other nuances that interfere with mine clearance. The enemy places dangerous surprises at different depths – from 5 to 15 centimeters.

– You can’t make a mistake: the price is too high.

– Gas pipeline. Anti-tank and anti-personnel mines were planted in large numbers right next to the gas distribution point itself. We destroyed about 80 TM-62 anti-tank mines of various modifications: in a metal case and in a plastic case. A mine made of plastic is almost impossible to detect with a mine detector, the device reacts only to a metal fuse, and it has a weak signal.

Dmitry Zabelin, the head of the Lugansk Linear Production Department, said that cleaning up the gas distribution point would make it possible to restore the entire gas pipeline in the future. According to the specialist, the last time natural gas was supplied through the gas pipeline connecting the northern part of the LPR with the southern and eastern parts was carried out in 2014. It was then, as a result of direct hits of shells, that it was damaged. It was not possible to restore this vital object for eight years, since it was on the line of contact.

– Their behavior can be compared with the behavior of the Nazis, who, just retreating, destroyed everything. The logic is something like this: if we cannot keep it, then we must destroy it. At the same time, destroy it in such a way that it would be impossible to restore it.

In addition to important objects, according to the officer, the Armed Forces of Ukraine actively planted anti-tank mines, mainly in those areas where heavy equipment could pass. The mines were set up with cunning.

– Several anti-personnel mines were placed nearby. Every fifth anti-tank mine was set to be non-removable. That is, if a sapper even discovered it, he would not be able to pull it out of the ground. We have to destroy it on the spot.

The interlocutor said that here, in the Donbass, sappers most often have to deal with anti-tank and anti-personnel mines.

– Anti-personnel – these are mainly high-explosive PMNs, – the specialist clarifies. – The most disgusting. By themselves, they are small, the pressing force is from 5 to 15 kilograms. However, this “baby” can easily tear off a person's foot. In the common people, she is called the “Black Widow”. Still often you have to deal with hand grenades placed on the tension sensor of the target. That is, a person passes, the wire is pulled, a check flies out of the grenade and an explosion occurs. The radius of damage is from four to ten meters.

– As a rule, a hand grenade is placed on a regular fuse, which is supplied in the kit, but here we observed options for non-standard installation. For example, when a hand grenade is installed with a fuse without slowing down. The standard installation option during a throw gives a slowdown of 3.2-4.2 seconds. That is, from the failure of the checks to the explosion, you can count from one to three or four. But with an emergency installation, this does not happen. When the tension sensor of the target is broken, an instant detonation follows. The sapper simply has no chance to somehow react, to jump back.

Anti-tank mines were found on the same gas pipeline, under which two more were installed. It turns out quite a serious charge. When equipment hits such a pyramid, the top mine works like a fuse and initiates the detonation of the others.

Of the technical assistants, according to Russian specialists, the Uran-6 sapper robot helps out a lot in their hard work.

An international mine action center specialist, operator of the Uran-6 robotic complex with the call sign Boba, says that the robot's task is to make passages in anti-personnel minefields. The machine can withstand the detonation of anti-personnel mines of all types, as well as improvised explosive devices with a capacity of up to one kilogram of TNT. It can work for about five hours on one gas station. It would take a sapper up to a month to do the same job.