Serena Williams’ three-year-old daughter, Olympia, looked just like her mom while taking a water break during her tennis lesson! See the sweet new snap from Instagram!

Look out Melbourne Park, there’s a new tennis star making her way to the court! Serena Williams‘ three-year-old daughter, Olympia, looked absolutely adorable rocking a baby blue tennis dress with pink tennis racquet detailing in an Instagram post from November 19. The youngster, born Alexis Olympia Ohanian Jr., looked like she had put in quite a lot of work on the court, as she sat on her bench, pristine white tennis shoes and all, and took a healthy gulp of water from her Frozen-themed water bottle!

Right next to Olympia, holding a slew of tennis balls, was the animated version of her favorite little doll Qai Qai! The pic was taken for a fun caption contest for the youngster’s account, and fans were ready to serve their best lines. “Eyeing that first Grand Slam like,” one fan commented. Another chimed in with, “Next game, I got you mommy!” The pic was undeniably adorable, but it’s nothing new for little Olympia, who just started following in her mama’s footsteps!

Just one week before this recent picture was taken, Olympia looked just like her 23-time Grand Slam champion mom, 39, in a November 12 photo where she rocked a red tennis outfit. The look was almost exactly like the one Serena rocked during her quest for that elusive 24th Grand Slam title at the 2020 U.S. Open, where she fell in the semi-final to longtime peer and rival Victoria Azarenka. Since choosing to withdraw from the following Grand Slam, the French Open at Roland Garros, the tennis living-legend has been spending a lot of quality time with her baby girl. 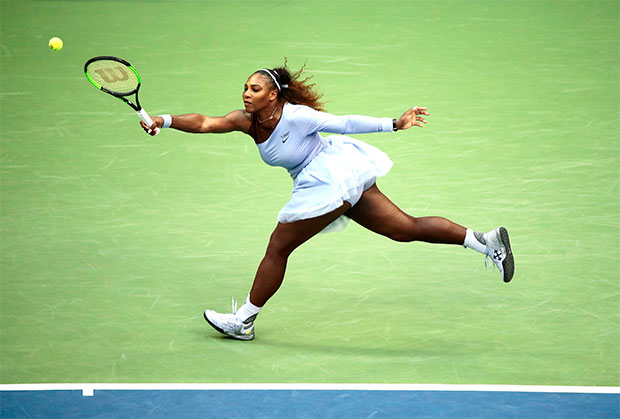 Serena Williams returns a shot to Kaia Kanepi, of Estonia, during the fourth round of the U.S. Open tennis tournament, Sunday, Sept. 2, 2018, in New York [AP].Serena, who shares Olympia with husband Alexis Ohanian, 37, has been making a lot of fun memories with her three-year-old. The mother-daughter duo have been spending lots of time watching Paw Patrol and even singing the theme song a cappella! Of course, the fashion mogul and athlete is already gearing up for her next challenge — the 2021 Australian Open.

Serena is slated to compete in the first Grand Slam of the year in Melbourne Park, Australia. The last time Serena won a Grand Slam title was actually at the Australian Open back in 2017. Making the moment even more special, Serena was pregnant with her daughter at the time she played the championship match against her equally talented sister — Venus Williams! Fans are so excited to see Serena get back on the court. Perhaps in years to come, we’ll see Olympia serve, chip, and volley, too!