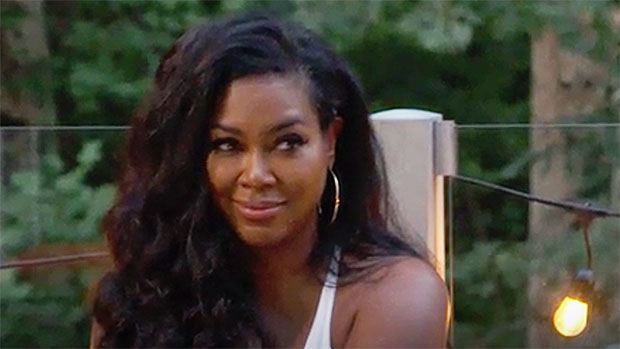 Kenya Moore made a shocking reveal during the Jan. 10 episode of ‘RHOA’, when she said ‘there are three ladies’ in the cast ‘who could get it’… meaning, those are the ones she’d gladly hook up with.

It all started at a surprise party that Kenya Moore threw for Cynthia Bailey and fiance Mike Hill during the Jan. 10 episode of The Real Housewives of Atlanta. While everyone was sitting down for dinner, LaToya Ali told everyone that she had taken some sexy pics of Kenya for an online dating profile. But when she revealed one of the photos she had taken, it was a bare backside picture of Kenya.

Kenya immediately became bashful and asked LaToya to put it away, but everyone had already seen it. And after LaToya complimented Kenya’s bare butt, Marlo Hampton made a joke about it being fake. Kenya wasn’t happy about it and told Marlo that she shouldn’t have been invited to the party. Kenya also clapped back and suggested that Marlo wanted to “eat” her derriere.

Marlo denied ever wanting to do such a thing, and that’s when Kenya took the opportunity to reveal which ladies sitting at the table she’d allow to “get it”. No one truly wanted to know who Kenya was thinking about, but she went ahead and named them anyway. And they were: Cynthia, Kandi Burruss, and LaToya.

Someone had joked that Porsha Williams would be one of them, too, but Kenya said no. And Porsha claimed that even if Kenya did want to hook up with her, Porsha would “beat her up” in bed. Yikes!

Porsha and Kenya also tried talking about what happened last week, when Kenya was uninvited from her surprise party, but they agreed to postpone the conversation for another time. And then, maybe they can finally figure out where their friendship stands.