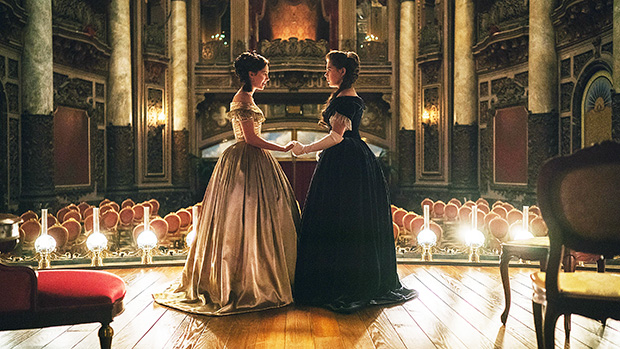 Production Designer Neil Patel talks about his work on ‘Dickinson’ ahead of the season 2 finale & explains the inspirations behind the rich designs he created for America’s greatest poet.

It’s not just Hailee Steinfeld’s Emily Dickinson that matures in the latest season of Dickinson; the world around her is expanding as well.  While season one of the hit Apple TV+ show took audiences to Walden Pond, the circus, and Emily’s poorly attended fantasy funeral, season two of Dickinson explored much more opulent locales in pre-Civil War America. At the helm of this vision was production designer Neil Patel, a new addition to the series for season two and the visionary for what’s to come in season three.

“I watched the first season and was absolutely in love with the show,” Patel said about joining the Dickinson team. “The creative friction between the contemporary dialogue and music and the beautiful period look appealed to my sensibilities.” Patel, who’s background includes designing for theater as well as TV/movies, worked alongside series creator Alena Smith in designing the scenes that would define the season — from a Boston Opera House to a New England water cure to The Evergreens, described as the pinnacle of New England literary life by Sam Bowles, and the real-life home of Austin and Sue Dickinson in Amherst. 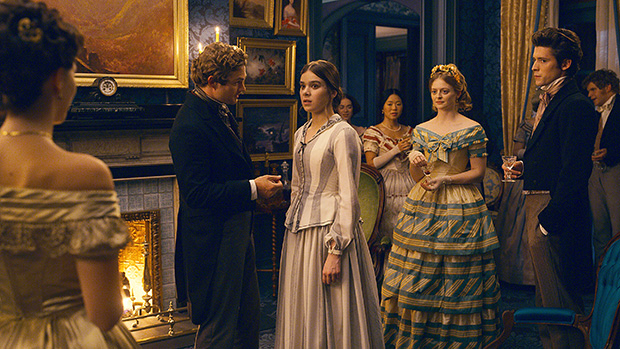 Patel graciously took time out to discuss the inspirations behind his designs for season two, shared some easter eggs behind the opera episode (my favorite!), and hinted at how Emily’s world will look different in season three.

This show is led by two very driven and creative women, starting with creator and showrunner Alena Smith and then, Hailee Steinfeld, star and EP. What can you say about working with them and their vision for the season?

Alena obviously has a very strong and unique vision for the show.

She is also a wonderful and generous collaborator, so it is a real pleasure to work with her. We are always looking out for historical truth and detail, but also looking to give the show its own visual style. The show is seen through the lens of the extraordinary artist Emily Dickinson, who Hailee so brilliantly embodies. I don’t interact with Hailee in my design and production process, but I’m always imagining the sets and scenes with her sensibility and take on the character in mind.

What I love about season 2 is how far beyond The Homestead the audience is taken, even when it’s just across the lawn at the Evergreens. Am I correct that your team built essentially the entire ground floor? How much of it is what people could actually see if they visited Amherst and how much is you riffing?

Yes, we built the entire ground floor of Evergreens, including both the interior and exterior! The ground plan and Victorian Italianate Villa style is based on the real Evergreens, which you could recognize if you visited it in Amherst. I took liberties with the palette and interior detailing to make it more luxurious and to support the story of Sue’s elaborate salons. The tall ceilings, columns and fabric wall-coverings are not things you will see in Amherst. 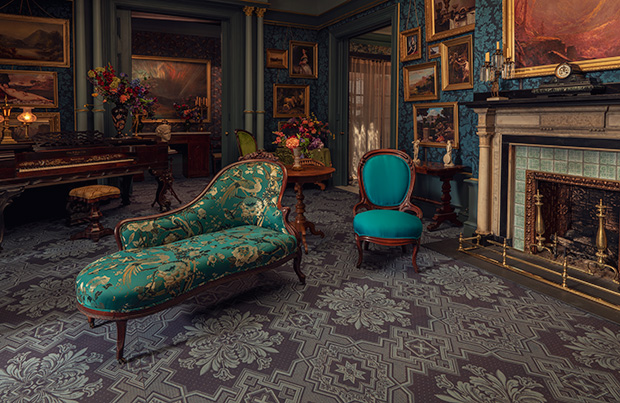 My favorite episode of the season is ‘Split the lark’, set in a Boston Opera House. I know that your team very masterfully transformed a movie theater lobby in NJ to look like this 19th century opera house. What was that process like?

When we scouted the Loews Theater in Jersey City, we first looked at the actual theater, which was too big and in too much disrepair to work for us. As we were leaving through the lobby, I noticed that its horseshoe plan and ornate mezzanine had the bones to be the opera house. We had to build a stage and completely transform the main floor into the orchestra level of the opera house, but the architecture was perfect. I had spent some time as a student in Milan where I regularly saw operas at La Scala from the peanut gallery, so I knew that this lobby could create the ambiance of an opera house that would really convey the sense of glamour and opulence that would enchant Emily.

Austin has this line to Sue, just as the opera starts, that the production looks like one of her salons. Was the design of the on-stage opera meant to look like the Evergreens?

Yes, it was! The opera they are seeing is La Traviata, and in my prep, I had all the scripts, so I knew that Emily would conflate Sue’s parlor with Violetta’s parlor in the opera.

I looked to European parlors to influence the design of the Evergreens, and the palette and structure of the stage set is keyed off of that design. You may have also noticed that Violetta’s gold dress is very similar to Sue’s gold dress in the first Evergreens scene in 201.

My eye kept drifting to that beautiful chandelier and it occurred to me, given that the theater is from the 1920’s, the chandelier was likely electric — did it pose any problems for you and your team?

We often deal with this problem in location shooting. The chandelier is indeed electric, but thanks to the brilliant electrics and visual effects team with the right bulbs and some work after the footage was shot the lights appear to flicker like candles. 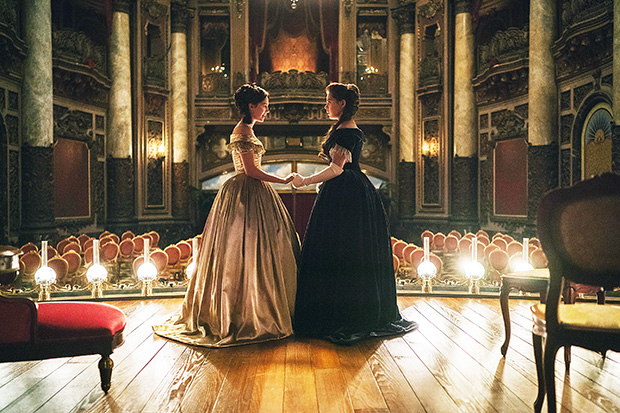 Alena has said in interviews that Season 3 is written and ready to go. Has your team started work?

Yes, I started my work in November and we start shooting in March. It has been strange working in the current conditions, but I think we are managing well. It helps that we all know each other and are working on a show we all love.

Alena has hinted that you’re headed into a darker story, especially given that the story will happen during the Civil War. Will going into that era drastically change a lot of the production design?

Yes, it has by the nature of the material. Season 2 was about fame and glamour, it had a sense of opulence, especially in the Evergreen scenes and the opera and spa episodes. Season 3 is darker and the palette for the season reflects that. Although we are tackling the Civil War it is seen through the eyes of Emily, so it will also be full of surprises, nuance and as always with Dickinson, humor.

Leather is very tricky material: it’s durable, waterproof, and stronger than fiber but requires special attention and care. It can’t stand direct sun rays and pets with claws. In addition, it’s relatively expensive. That’s why you need a thorough approach when choosing a leather couch. Moreover, to choose high-quality leather furniture, you might want to consider a couple of other factors, such as a frame, leather type, and filling, as they determine the quality of the product. So, if you want to make sure that the couch you choose is worth every penny, check out this guide.

Style and color
A leather couch is a choice based primarily on your own taste. A traditional-style model with a wooden frame and leather upholstery will harmoniously complement any interior.

There’s no need to follow fashion trends, especially if you value comfort. Today, leather couches with a low back are quite popular. They look really nice, but this model doesn’t provide proper back and head support when sitting, which means that you’ll hardly get any positive emotions from it.

A model with a wooden frame looks great with classic interior design while being reliable and eco-friendly at the same time. Frames made of coniferous woods don’t cost too much. But this material doesn’t last as long as oak. Oak frames are very reliable, that’s why the most expensive couches are made of it.

A smooth wooden surface is a sign of the high quality of the oak frame. If the main parts of the frame are fixed together with bolts, its quality is good. But if the details are fixed with screws, they’ll begin to loosen up pretty soon.

If practicality is important to you, you’ll find a lot of furniture stores in NJ (https://casaeleganza.com) that offer high-quality models with reliable wooden frames.

2) Combined frames
Leather couches with a frame made of a combination of particle board and wood can have the same functional qualities as models with purely wooden frames. Pay attention to how the particle board frame is processed. For example, a special paint on it will protect you from the harmful substances contained in particle board.

– Today, there’s a much bigger chance to find polyurethane filling instead of foam. It lasts longer and retains its elastic properties, ensuring better durability.

– A nice choice is a sofa with multi-layered filling. This can be a bit more rigid polyurethane foam in the lower layer and softer, thinner material in the upper layer. This type of filling isn’t used in budget models.

Leather couches are elite furniture, so companies don’t save on materials. Even the rear walls of your couch should have leather upholstery.

Shapes and sizes
Make sure that your new purchase will fit into the room. In large living rooms or halls, corner couches look best – they’re spacious enough to fit a large number of guests. For a smaller room, buy a more compact, straight model.

Although the classic leather furniture is rather intended for decoration, some manufacturers equip couches with folding mechanisms, allowing you to use some models as additional sleeping space. But if you want your couch to last as long as possible, don’t turn it into a bed.

Fetty Wap has invested $100,000 in his girlfriend Yaya’s clothing line Omaj by NoiR.

You can’t tell Fetty not to ever mix business with pleasure because that is exactly what he is doing and he is getting praise for it from his girlfriend and from his fans. The Patterson rapper was on hand on Sunday night for the launching of the outerwear clothing line in Ridgefield Park, NJ. The rapper walked the runway rocking some of the collection and even performed at the event hosted by “Love & Hip Hop: New York” star Mariahlynn.

Fetty Wap also revealed that he is sinking a hundred grand of his own money into the business which means that he will likely put his image on the line to help promote the brand. Fetty will be performing in Jamaica next month for the annual charity concert Shaggy and Friends. This will be the first time that the rapper, who is of Haitian heritage, is performing in Jamaica.

Fetty Wap was arrested in November for DUI after cops pulled him over for racing on a busy highway with another driver. He blew a .09 breathalyzer test on the scene and slapped with 15 different traffic related charges.