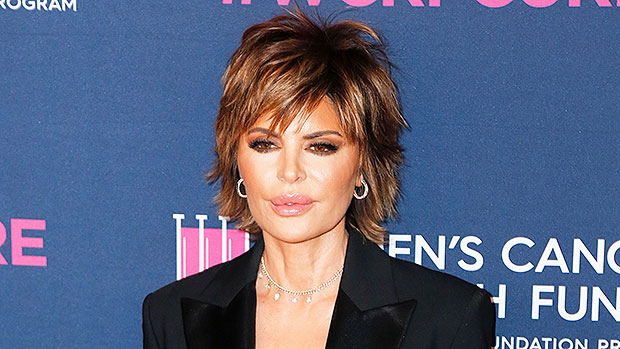 Lisa Rinna has debuted a new longer hairstyle and perfect makeup showing off her plump pout. Fans are remarking how the ‘RHOBH’ star looks like she could be a Kardashian sister.

Well hello Lisa Kardashian! The Real Housewives of Beverly Hills star Lisa Rinna is celebrating her new lipstick line, and released several glam photos of her wearing one of the products on her pillowy pout. In one snapshot she shared via Instagram on Jan. 15, fans said Lisa looked like she could be Kim Kardashian‘s twin! The 57-year-old ditched her iconic short shag for a long and perfectly styled hairpiece by celebrity wig and hair stylist Clyde Haygood, who just so happens to have worked on Kim’s tresses as well!

Lisa’s brunette locks featured blonde highlights, and the hair was pulled back with long extensions coming from a slight bouffant lift at the back of her head. The Bravo star’s skin looked extra bronzed in the photo, and she wore a rosy eye with super long and full lashes, perfectly contoured brows and dark liner that made her eyes look similar to the shape of Kim’s. 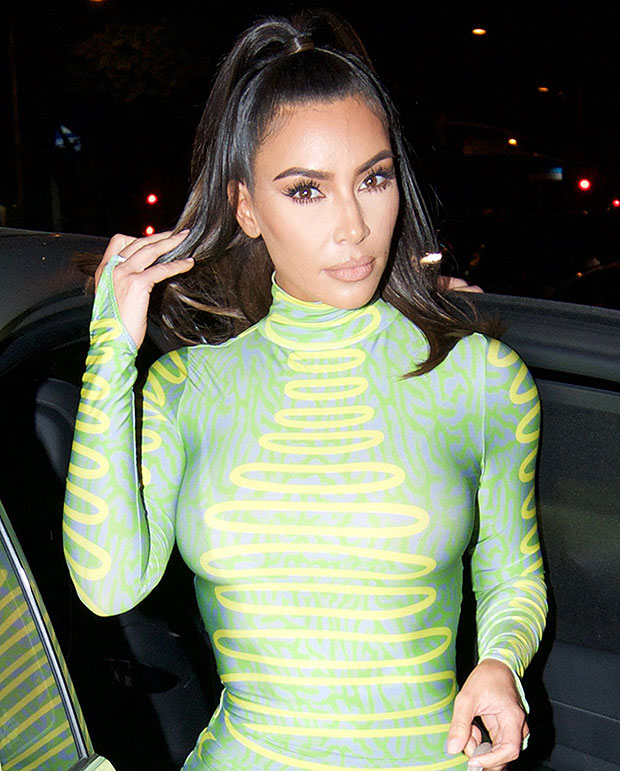 The mother of two’s famous oversized pout also resembled that of the SKIMS founder’s pillowy puckers. Lisa’s already large lips looked gorgeous in a shimmery pink shade from her new beauty line called “Rose All Day.” Add chunky hoop earrings and fans were doing a double take in the comments that Lisa bore such a striking resemblance the 40-year-old Keeping Up With The Kardashians star.

User @sanapapix commented, “Could pass for Kim K with this pic,” along with a hearts for eyes smiling emoji. @mettel74 told Lisa, “You look like Kim Kardashian…” to which @maryehorsman43 agreed, saying, “I said the same.” User @mellimoo21 marveled, “It is Kim Kardashian.” Fan @pamulafloyd told Lisa, “You have some @kimkardashian going on there.” 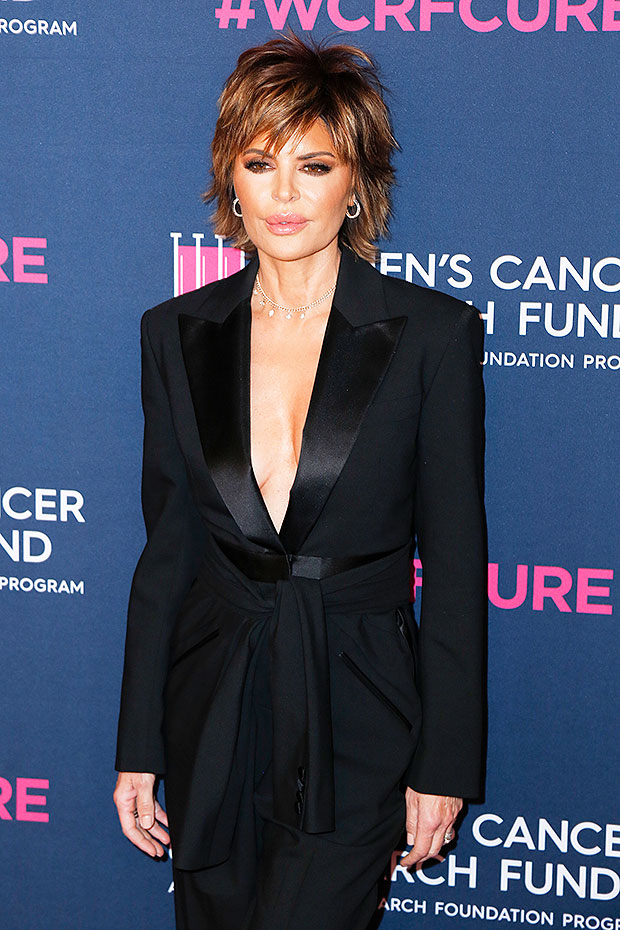 Lisa Rinna has for the most part kept her same short shag her signature ‘do ever since the 1990s. Photo credit: AP Images.

Other fans were completely wowed by Lisa’s long hairstyle, as she’s worn her short shag cut for nearly her entire career. Thus any time Lisa changes things up with her tresses, her IG followers notice. Fan @mez_mo_rizing told her “So love the hair on you…let your hair grow…it looks amazing on you,” while @alexeichamberland said, “Make this permanent.” User @dustin_barks commented, “Your hair is everything!!! Beautiful!” Fan @angela.marie.frangione gushed, “Wow you look like you went back in time! You look half your age! Beautiful!” This really is one of Lisa’s best looks, as her hair and makeup are absolute perfection. 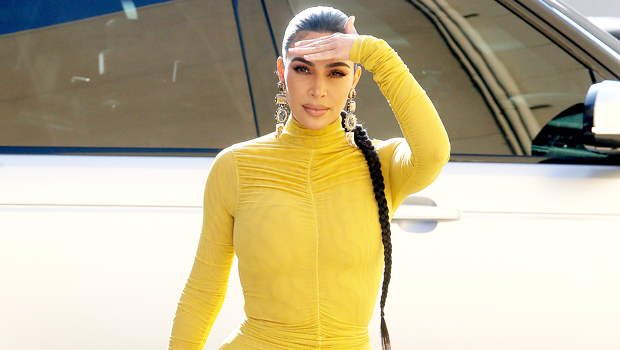 Kim Kardashian is dropping new SKIMS hosiery and her wedding ring in a photos! Amid reports that her marriage with Kanye West over, Kim ditched her massive diamond while modeling new tights.

Kim Kardashian was without her wedding ring in a number of Instagram posts on January 11, that showed the SKIMS founder modeling the brand’s new hosiery. Fans were quick to point out that Kim’s left hand, specifically her ring finger, was missing her massive diamond sparkler from husband Kanye West. Yet, many critics weren’t surprised to see her bare ring finger, as the couple is at the center of looming divorce reports.

This marks the second time this month (and it’s only January 11th) that Kim ditched her wedding ring in social media posts. On January 5, she went ringless while modeling a brown lingerie set from SKIMS’ new Body Basics line. Before that, Kim left her ring behind while celebrating Christmas Eve at sister Kourtney Kardashian‘s with her four kids — North, 7, Saint, 5, Chicago, 2, and Psalm, 1 — and the rest of the KarJenner family. The last time fans saw Kim rocking her wedding ring on social media was on December 14, when she modeled SKIMS Backless Shapewear.

A source close to Kim recently shared with HollywoodLife that “no one should be looking at her ring, whether she’s wearing it or not, as some sort of message” to be cryptic. “She often chooses to go without it for pictures because she likes a clean look,” the insider explained, adding that “when she’s home chilling out she doesn’t always wear it and that has been true for many years. It’s nothing new, people are just reading into everything.”

Throughout 2020, Kim stood by Kanye during bizarre his Twitter rants, the time he physically peed on a Grammy and even his short-lived presidential campaign. Despite her unwavering support, the couple appeared to quietly distance themselves from one another as 2020 came to an end. Toward the holidays, Ye’ retreated to his Wyoming ranch, while Kim traveled to Lake Tahoe and Aspen with the couple’s kids and her famous family. Additionally, Kim and Kanye haven’t been photographed together since October 2020. 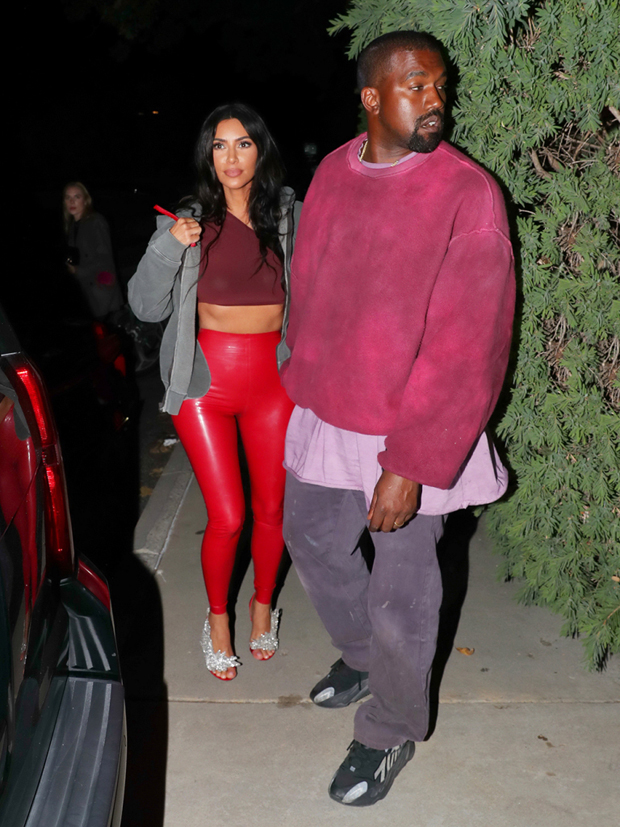 Just a few days into 2021, Kim and Kanye’s marriage was on the chopping the block, according to three different reports. PageSix, which was first to report the troubling news, claimed that “divorce is imminent” for Kimye. The outlet also reported that Kim hired Laura Wasser, a powerhouse celebrity divorce attorney, who’s work with the likes of Angelina Jolie, Britney Spears, Heidi Klum and Gwen Stefani, among many other big Hollywood names.

Kim Kardashian stripped down for her latest SKIMS ad wearing nothing but a body suit and strappy nude heels, as she showed off her super toned legs.

Kim Kardashian is clearly staying super fit while in quarantine! The mom of four flaunted her toned and tanned legs in a new SKIMS ad, which she shared on May 21. “Summer Mesh collection just dropped,” she captioned the pic, which showed Kim with long, bleached blonde hair wearing nothing but a nude bodysuit and matching strappy pumps. The 39-year-old sat on a white couch and looked at her phone in the snap promoting her latest shape wear. “Ah your [sic] so beautiful Kim,” one fan wrote in the comments section, as hundreds of others dropped heart emojis and fire emojis.

Kim has been hard as work promoting SKIMS while in quarantine. Earlier this week, she revealed that the company would release a line of seamless face masks. The masks come in five different tonal nudes, to suit most skin types, and retail for $8 a pop. The masks sold out almost immediately, however fans can join a waitlist ahead of the re-stock next week. In keeping with the solution-focused shape wear line’s aesthetic, the masks are simple, ultra-soft and breathable.

Kim has also revealed she’s committed to helping those affected by the global health crises, with SKIMS pledging to donate 10,000 of its new masks to four organizations: Baby2Baby, Good+ Foundation, LA Food Bank and National Domestic Workers Alliance. It comes just days after her baby sis Kylie Jenner relaxed on a gray sofa as she sported a beige-colored SKIMS outfit. The neutral color has yet to be released by her big sis, but we’re already loving the vibe! Kylie added a touch of her own style with a chic pair of black sunglasses, captioning the pics with a white heart.

In the first photo, Kylie posed with one hand on her sofa as she seductively stares into the camera, and in the next, she placed both hands on her hips. Her honey highlights were still intact as she kept her lengthy locks pulled back into a low ponytail. Kim herself even commented on the photos, writing “new @skims cozy colors” — confirming what we already knew! Ky has been actively promoting Kim’s new collection, showing off a darker caramel colored version in a post just a week ago.

Kim Kardashian greeted her 168 million Instagram fans with a sultry photo of herself rocking a white crop top and her toned legs!

Kim Kardashian, 39, is saying “good afternoon” to the world with her long legs! This is what the Keeping Up with the Kardashians star captioned a photo of herself on May 6, in which Kim leaned back in a cropped white top and let her toned legs take the spotlight. Kim is currently isolating in her Hidden Hills mansion with Kanye West and their four children North, 6, Saint, 4, Chicago, 2, and Psalm, 4 mos., but this was a full-on glam day for the SKIMS owner. She rocked her trademark contour and nude lips!

Khloe Kardashian, 35, was all for Kim’s sexy selfie. “Ohhhhh well great afternoon,” she commented, while Relatively Nat & Liv Natalie Halcro had a similar reaction. “Stunner,” she wrote, echoing what we were all thinking.

Kim also put her legendary legs on display a day prior, when she threw on a sparkly maroon bikini and went for a stroll on the sand behind the beach rental that she shares with Kanye. With matching maroon shades and hoop earrings, Kim proved that quarantine hasn’t affected the glam that she’s known for bringing.

Kim has been indulging in solo mommy time, and for good reason. “Kim really needed a break and some alone time so Kanye took the kids away to give her one,” a source EXCLUSIVELY told HollywoodLife on May 2. “She loves the kids so much, but like any mom, she just needed time to herself. She needed a break from the kids and the screaming. She needed peace and quiet and alone time for herself personally, but also because she needed to focus on her law studies and business meetings and decisions which included SKIMS. It was Kanye’s idea to go.”

Don’t worry about those rumors of a shaky marriage, either. “She had work to do and felt she needed peace and quiet so Kanye took them. Despite reports, there are no issues in their marriage. They’re solid,” our source added. “They’re totally fine and doing great as a couple. It frustrates them to see otherwise. Just like any mom, Kim too needs time for herself.”