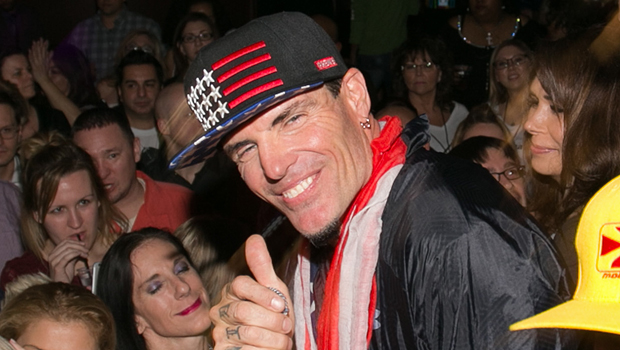 Vanilla Ice was dragged on Twitter after video surfaced of the rapper performing at the Mar-a-Lago New Year’s Eve party, where Donald Trump Jr. and more were in attendance amid the COVID-19 pandemic.

Vanilla Ice was grilled on social media after the ’90s rapper was spotted amongst a group of performers at the Mar-a-Lago New Year’s Eve party on December 31. The “Ice Ice Baby” rapper, 53, performed his 1989 hit to a crowded, maskless room of attendees. Video from the event, which circulated across social media, captured the moment the rapper took to the stage to perform the song, as well as “Play That Funky Music” by Wild Cherry.

Among the party-goers were President Donald Trump‘s son, Donald Trump Jr., and Don Jr.’s girlfriend Kimberly Guilfoyle. Both Kimberly and Don Jr. previously tested positive for COVID-19. Kimberly contracted the virus in August 2020, while Don Jr. tested positive in November. President Trump and First Lady Melania Trump were not did not attend the festivities. Many on social media were dismayed by what they saw, taking to Twitter to air their frustrations.

I just saw video of Kimberly Guilfoyle dancing to Vanilla Ice as she shouted the words ‘play that funky music white boy’ and I’m not sure I will make a full recovery.

“New Year’s Eve celebration at Mar-a-Lago during deadly pandemic,” one person wrote, adding the footage from the event to their post. Other’s called out Vanilla Ice, specifically. “I just saw video of Kimberly Guilfoyle dancing to Vanilla Ice as she shouted the words ‘play that funky music white boy’ and I’m not sure I will make a full recovery,” one person wrote.

A live Vanilla Ice performance *and* a chance to catch a deadly disease? That’s win-win! https://t.co/YzMucJez5g

“When Vanilla Ice sings un-ironically ‘play that funky music till you die’ during a pandemic at Mar-A-Lago,” another wrote on Twitter, adding a gif beneath their message. “A live Vanilla Ice performance *and* a chance to catch a deadly disease? That’s win-win,” one person added on the social media platform. “And 2020 ends not with a bang, but with a super-spreading Vanilla Ice concert at Mar-a-Lago,” another person said.

This isn’t the first time that Vanilla Ice has faced backlash for performing for an audience during the pandemic. Back in July, he announced that he’d planned a concert to celebrate the July 4 holiday before bowing to pressure only to share that he would reschedule the event to a “better date.” As those at the Mar-a-Lago New Year’s Eve event partied the night away, the coronavirus continued to claim the lives of thousands of Americans. As of New Year’s Eve, more than 340,000 lives have been claimed by the coronavirus, according to the Centers for Disease Control and Prevention.

Vanilla Ice has canceled his Fourth of July concert after much backlash amid the coronavirus pandemic and push for social distancing.

Vanilla Ice has cancelled his Fourth of July concert after drawing extensive criticism over his disregard for social distancing. The 52-year-old “Ice Ice Baby” rapper was originally slated to perform at the “Independence Day Throwback Beach Party” at the Emerald Point Bar & Grill in Austin. However, Texas is one of the four states with the most reported coronavirus cases in the United States, and the event quickly attracted nationwide backlash. He took to Twitter on July 2 to announce the concert would be rescheduled. “Due to the increase in COVID-19 numbers in Austin we’re gonna move the concert to a better date,” he began.

Due to the increase in COVID-19 numbers in Austin we’re gonna move the concert to a better date. We were hoping for better Coronavirus numbers by July but Unfortunately the numbers have increased quite a bit so for the safety and health of everyone we’re going to stay home. pic.twitter.com/MWWfNWf3zd

“We were hoping for better Coronavirus numbers by July but Unfortunately the numbers have increased quite a bit so for the safety and health of everyone we’re going to stay home.” It comes just days after he shared a post on social media promoting the event in Texas, where over 2000 people have lost their lives to the deadly virus. “Get ready to go back to The 90s, the greatest decade ever. Bring your dancin shoes, Speedo’s, bikinis, neon colors and and ninja turtle gear… hahha,” he wrote.

The venue was selling up to 2,500 tickets (priced between $25-$300), the Austin Chronicle reported. With the potential for thousands of attendees to pack in shoulder-to-shoulder, people weren’t too thrilled to hear about Ice’s upcoming gig when it started trending on July 1. On that same day, the Texas Department of State Health Services reported 8,076 new coronavirus cases — a new single-day record for the virus hot spot.

Twitter commenters were quick to slam both Vanilla Ice, and those purchasing tickets for the event. “Imagine dying of the coronavirus because you went to a f–king Vanilla Ice concert,” writer Eric Francisco tweeted, while another person wrote, “If you get COVID because you went to the Vanilla Ice concert that somehow is the exception to closure rules, frankly, you deserve that.” Fans believe Ice couldn’t read the room, considering that the state’s governor Greg Abbott just ordered all bars to be closed and reduced restaurant capacity to 50 percent on June 26.